Ekin-Su Cülcüloğlu and Davide Sanclimenti have been crowned the winners of Love Island UK 2022.

The couple, who declared their love for one another in an earlier episode, finished ahead of runners-up and fan favorites Gemma Owen and Luca Bish in the Grand Final.

As the results of the public vote were announced by host Laura Whitmore, Ekin-Su leapt into her Italian partner’s arms as they celebrated the news with their former castmates.

Stream every episode ever of Love IslandUK and Love Island Australia for free on 9Now.

“Thank you to everyone for voting for us, and thank you for making us who we are,” Ekin-Su said shortly after the results were announced.

“I can’t believe it. I think everyone is a winner in here, and I just feel really lucky to be here.”

“I didn’t expect it, I still don’t believe it,” Davide added with a smile on his face.

“We were all four great couples, but yeah… thank you for everyone…”

READMORE: Molly-Mae Hague has her lip fillers dissolved as she aims for a more ‘natural’ look

“For going on our journey with us,” Ekin-Su chimed in, “It means so much.”

Laura also revealed there was a final twist in this year’s season, meaning the pair would automatically share the £50,000 [AUD $88,000] prize money instead of the usual “split or steal” format.

“The winning couple will split a huge £50,000 and this year we are not even asking them to choose between love and money,” she said at the start of the show.

Fans of the show had a lot of thoughts and feelings about how the finale played out and took to Twitter to share their reactions.

Davide was the first Bombshell to arrive in the Villa, and was originally Coupled Up with Gemma Owen.

But when Ekin-Su arrived on the scene, his head was turned immediately and their romance journey soon began.

Their love story wasn’t all smooth sailing, as Ekin-Su infamously enjoyed a cheeky kiss with Jay Younger by crawling across the balcony, while Davide’s head turned slightly in Casa Amor.

But soon enough, the pair realized they were made for each other and recently confirmed they were exclusive.

After discovering they were in the final two, Ekin-Su and Davide sat down with Laura to discuss their romance journey.

“As soon as I saw her [Ekin] my head turned, I was like wow. Initial attraction or something more,” he said.

They also touched on meeting each other’s parents during the final week, with Ekin-Su adding: “That was one those moments that was so special.

“I felt like this was my future mum, I felt so close to her even though we couldn’t speak the same language.” 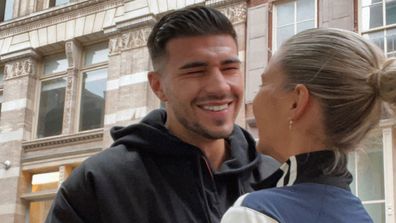 Stream every episode ever of Love IslandUK and Love Island Australia for free on 9Now.